Steal Me a Holiday 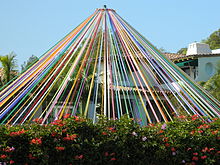 ​What it is: nothing. Christianity conveniently ignores this! Even the saints listed for this day aren't any Big Names. (Although some Catholics use this day for a "May Crowning". Hmm…if Mary isn't a goddess, why do you have a whole celebration that smells vaguely of Paganism?)
What it was: Beltane/May Day

This one has died a little harder, as many places in Europe still do maypole dances; and I just learned this year that Beltane is a Really Big Thing in Edinburgh, to the point where it's now on my bucket list.

Beltane is the last of the three fertility rituals, and is the time where couples commonly joined hands and jumped over the fire to pray to the gods for children.

I've never been to a Beltane celebration, but ever since reading about it in Wise Child (Monica Furlong), I was so fascinated that it instantly became my favorite holiday.

P.S. from 2020: I think I’ve heard that they also still celebrate Beltane on Brodgar (where the book’s ceremony was held), which would be amazing to attend!

​What it is: nothing here, either! It is Lazarus's saint day, however.
What it was: Litha

​Probably the easiest way to describe this is a "big sun party". (Really…even when I looked it up to refresh my memory, the site I read didn't have a whole lot to say.)

Most of the time, Wiccans celebrate their holidays outdoors; but if there was ever a time to take the party inside, it would be Litha, since it's the Summer Solstice. Actually, Litha should be about celebrating the person who invented air conditioning, because that sounds like a fantastic idea for a holiday!

What it was: I guess the church took the summer off from thievery?
What it is: Lammas (July 31/August 1)

Living out in the country, I've learned to ignore the sights and sounds of the harvest, so I had to stop and think a moment before I wrote.

Despite being the first of the harvest festivals, nothing really comes in until September. Human edible foods such as tomatoes have already been in for weeks, while silage corn isn't pulled until October. (Before the rain started the other night, we had farm equipment and semis running up and down the road from sunrise to 11:30 or so at night, because silage harvest is presently at its peak.) Soybeans might be ready now or in the next few weeks, depending on when you plant them. (A quick search tells me soy takes forty-eight days from planting to harvest, so if you're picking on August 12, you planted them on or about June 25, which is well past frost season in Michigan.)

Still, summer is coming to an end, and—as the picture notes—animals are starting to think about spending extra time foraging so they can hibernate or make the trip south for the winter. So maybe Lammas is less about us harvesting and more about the animals.

What it is: nope…still napping…
What it was: Mabon (autumnal equinox)

This, the end of the Celtic wheel of the year, is seriously about fall. The harvest is truly starting, the deer are moving, the leaves are turning, the apple orchards are open…

…and we were struggling through 80 degree heat this year, because fall was a lie!

But it's usually better than that, which is why bonfires, cider and apples are all features of Mabon.

Okay, maybe not quite as much thievery as I thought. I was going to include communion as a bonus, but I'm not completely certain that the cakes and wine portion of the ritual didn't arrive at the same time as the rest of Wicca, so I'll leave that out.

Good thing this wasn't a rageblog…

Holiday Heckling ~or~ Look at the Bullshit We Celebrate!

Your ass should appropriate my foot! ~or~ When "Cultural Appropriation" Goes Too Far

This entry was posted on 25 Oct 2017 by Daya. It was filed under Uncategorized .