or This Was Never Going to Go Well 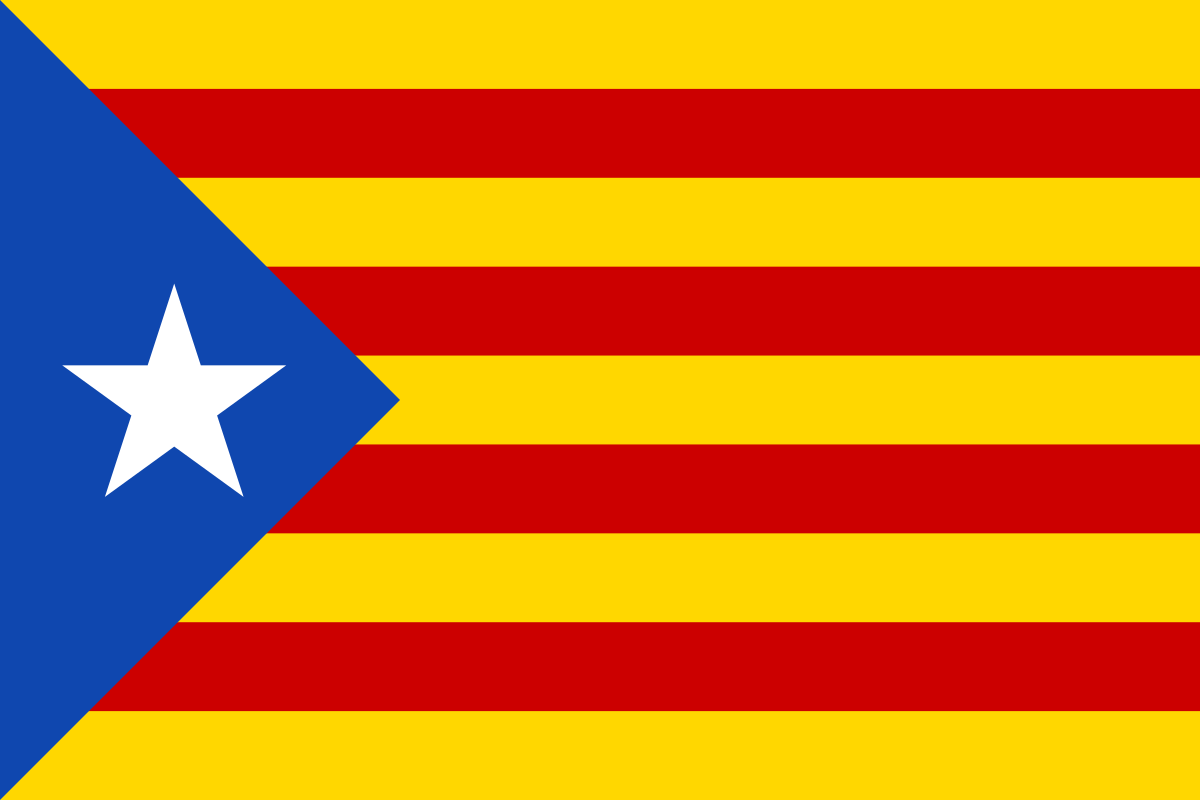 This, my friends, is the sign of Catalunya at war; of Catalunya in crisis. This is not the flag you see when Cataluyna is at peace. If you're one of those people who doesn't watch the news because "it's too depressing", you're missing a major political crisis in Spain. Scotland's latest attempt at independence has nothing on this.

Perhaps you're not aware that I speak una mica de català. It was the first Spanish ancillary1 that Duolingo introduced, and—despite not liking French (which influences Catalan, being that Catalunya is so close to the border)—I picked it up. Even though I don't study it very much, I call Catalan my unofficial fourth language, and I have a Catalan phrase (descansi en pau—rest in peace) on a shirt. Since I pay peripheral attention to Spain (much like Ireland—and y'all know I love Ireland), when one of the Kingdom's "autonomous communities" (not provinces—turns out those are the next level down) declares it's going to sue for independence, both sides are going to get a lot more focus than they usually do. I'd like the Kingdom to be at peace with itself, I thought, but Catalunya has been striving for independence since before most of us were born. And I don't like the way the Kingdom tried to disrupt things when Catalunya went to the polls.

​Did you miss that bit of news, too? Catalunya went to the polls on an independence referendum at the beginning of the month and the Kingdom was furious! They sent in riot police, shot at protesters with rubber bullets, dragged people out by their hair, tore up ballot boxes and generally made a big mess of things. I don't recall hearing if anyone was arrested, but (I think) over five hundred people were injured. 500! I didn't think Spain was into bully tactics, but maybe I was wrong.

"Whatever happened to peaceful discussion?"

"Do you think violence is the best way to get Cataluña to back down? I don't know what happens here in Spain; but in my country, if you treat people like that, they'll fight back harder—and the villain generally regrets the outcome."

​Unfortunately, the answer is that neither side has backed down. In fact, tempers have gotten hotter. How do you say, "scruffy little nerf-herder" in Catalan? And I mean that affectionately, like Leia might have said to Han after they got married. (Hee hee) Go, President Nerfherder! Save Catalunya! After a controversial vote in which the anti-independence lawmakers walked out, the President of Catalunya said (and I'm paraphrasing here), "Okay, we're done. I'm calling independence." To which the Kingdom's PM said, "Like hell you are! You're fired, your people are fired, the police chiefs are fired, all the state media are fired…Cataluña is Spain's, bitch! (And I'll prove it to you by replacing you on December 21.)"

Would you believe I still didn't know who to side with after that? They should be free, I thought. Just because the PM got rid of the president doesn't mean that some one else faithful to the Catalan cause won't eventually find their way into office! But then again, I continued. If you let Catalunya go, then the Basques will try again and then where will we be (in terms of unity)? Em…turns out that that won't make a great deal of difference. There is no such thing as a united Spain. There never has been.

You can skip this part if you like. It's kind of boring, and my history may not be all that sound…

See, when Isabel and Fernando were in charge, Spain looked a lot like this. (I don't know too much about Spanish history before them.) The crown of Castilla y Léon belonged to Isabel after inheriting it from her brother, Enrique IV; while Aragon belonged to Fernando and came with him as part of their marriage.3 Granada, of course, they conquered together shortly before Cristobal Colon came into the picture. (Not completely sure, but it might have been absorbed into Castilla y Léon for the duration of their marriage.) History tells us that the "Catholic Kings of Spain" (as Isabel and Fernando were known collectively) united those three regions under one crown—but that's not true, either. As it is now, the regions brought under the jurisdiction of the crown retained most of the power, and the Kingdom of Spain was just a big, loose collective. Castilla y Léon and Aragon split again after Isabel's death4, but that didn't keep future monarchs from trying to unite the country. In 1833, Queen Maria Cristina declared the creation of forty-nine Spanish provinces (there are now fifty); but the long retention of their own languages and customs left the Basques and the Catalans (even the Galicians, to some extent) with a sense of their own country and way of life separate from the rest of the Kingdom. After General Franco took over in 1936, he tried to use his dictatorship to push the regions of Spain together, but his commands were only for the duration of his reign—when the Kingdom returned in 1975, it attempted to find a way to appease all sides in its push for democracy. The constitution allowed for the creation of the present autonomous communities, allowing Spain to achieve a "separate togetherness", or for it to be considered a "nation of nations".

Wow, I thought. If Spain has never really been together-together, what difference does it make if Catalunya declares for themselves? I know Catalunya is prosperous, but I don't know how much of a financial impact there will be on the rest of the country—and you know how I hate crunching numbers! When the constitution was written (back when the current king's father came to power), they threw around phrases like "indissoluble ties of unity", but how can you claim that the Kingdom is united if what you have now is just a modernized version of the fifteenth century Kingdom with democracy thrown in? If Catalunya wants to leave, let them! If you wanted actual unity, maybe y'all should've thought of that before handing out liberties when you wrote the constitution.

And Prime Minister—really?! You really think bashing heads and generally looking like a jackass is going to win you support from overseas? Even if I wasn't on Catalunya's side before, your childish antics would certainly make me think twice! "Papi! Cataluña isn't playing nice with me! (*throws a giant hairy fit any American child would be proud of*)" Diosa mia! Is this how you lead, Señor Rajoy? Because it looks a lot like you took a leaf from Chump's playbook…and since America is currently the laughingstock of the world, I don't think that was such a bright idea! (I'd tell His Majesty to smack his PM upside the head, but I just heard the other day that King Felipe sides with him. Grrreeeaaat!)

All I can say is stay tuned. The Kingdom thinks it's over, but just because you call a tomaquet a peixo doesn't make it so! (Look at my tiny knowledge of Catalan!)

It's been a long time since I've signed off with a music or lyric video, but every time I think about Catalunya the past few days, I recall a line from a Linkin Park song: "Don't turn your back on me! I won't be ignored!" So here they are with "Faint" from 2003's Meteora.

1I wasn't sure what to call it—another word might be "regional". My intention was a term meaning "any language that is also spoken in a country, and has a basis in that country". Our ancillaries, therefore, might be Native American languages. Spanish ancillaries don't always have to have a basis in Spain—the second ancillary Duo introduced, Guarani, is one of the tribal languages of Paraguay.

2You'll notice I'm jumping between Catalunya and Cataluña—the former is the name of the country in Catalan, the latter is the name in Spanish. (Both are pronounced the same, to my knowledge.) If you're still unsure of where I'm talking about, it's the same place that the news outlets keep calling "Catalonia"—that's the anglicization.

3Navarre was considered a separate country, and usually ended up with a sibling of either the Spanish or the French royals on the throne.

4Fernando was never crowned King of Castilla y Léon, so the crown went to their daughter Juana and he was back to being King of Aragon. At least until they decided she was crazy and locked her away, at which point her son took over.

P.S.: As I was updating the photos for this (051319), I discovered that that dumbass Rajoy denies climate change. Good Goddess, you're a fucking moron!

This entry was posted on 28 Oct 2017 by Daya. It was filed under Editorial, Rageblog .