My Mother the Rain Magnet

My mother has a problem. For some unearthly reason, when you put her and a tent together, it always rains. 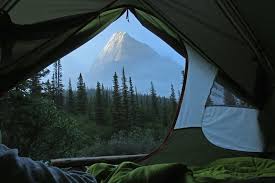 Not one of her pictures…this was just a pretty search result.

Once or twice? A coincidence. (If you believe in coincidences.) But multiple times with multiple victims people? It starts to become clear that Someone Out There doesn’t like her.

(Apologies for the bad picture. I lightened it a little, but don’t know why the person taking it didn’t tell everyone to take their hats off. L-R: my mom’s coworker [whose name I can’t remember], her son, me, Mom and Wayne [Mom’s boyfriend from 2004-8]) (I need a name, so I’ll call the coworker Rachel and her son Ben. [Anne and Chris also comes to mind, but, as I said…])

Our first trip camping together was to South Manitou Island in 2006. Since Wayne was retired, he’d come by and grab me and my bag and take me back to his place about an hour before Mom would get off work, so that I could help finish packing and we’d be ready to load my mother’s car when she got there. Since this was twelve years ago, my memory is a little fuzzy, so I don’t know if my body threw much of a fit1, but it was an otherwise lovely ride up to Traverse City on a summer Friday evening. We overnighted there and drove the remaining half hour to Leland, where we had breakfast (or rather, I attempted it2) and met up with Rachel and Ben at the dock to board the ferry for our weekend of camping.

That night, it rained.

This wasn’t your average summer shower—it rained so hard, Wayne’s tent flooded3, thunder shook the island, and the wind gusted through the trees so hard that…well, it didn’t sound like a tornado was coming, but it sure sounded eerie!

Fortunately, it was just Saturday night, so—outside of the hardcover book that was ruined (shouldn’t have brought it with me) and not having a shower between Saturday morning and Monday night—it was okay.

Well, I thought it was just going to be Saturday.

(Big Sable Point lighthouse, Ludington. I love Ludington so much that I sighed happily when I saw that picture.)

Fast forward to 2007. This year’s destination, the new Jack Pine hike-in campground at Ludington State Park (about two hours south of Traverse). When I was little, it had been a site for large groups, but they’d recently converted it to ten tent-only lots and my mom—being an avid backpacker by then—was eager to try it. Other than a slightly rainy setup and a damp first morning; this, too was a good trip. (Even more so for me, as I was able to persuade my mom to walk to the showers in the main campground with me at least once and didn’t have to be dirty all weekend.)

No, the problem was the tornado that swept in before we left. (Photos here.)

Having spent my childhood with grandparents that would call every time a major storm rolled in (to check on us and to remind us to go to the basement if there was a risk of tornado), I was antsy when my mom arrived because a warning had been issued and Wayne hadn’t showed me where the door was to his basement. My mom must have pointed it out shortly after her arrival, because not ten minutes later, I decided I didn’t like the sound of the wind and was slipping on my flipflops. Apparently, she felt the same way, because she was hot on my heels!

When the wind cleared, we went outdoors to find corn leaves, foam, leaves and other debris in the yard—even someone’s report card!

We debated whether we should still go to Ludington—and we did in the end, much to my discomfort—but it was scary coming back and seeing the devastation, realizing we’d been a mere three miles away from the tornado. (My dad lives six miles away from where the tornado touched down, so I’m sure I was anxious about leaving him behind, too.)

(The Viking Arms in Ludington, where my mom and I stayed during our annual Labor Day Weekend trips. I thought they were cool back in the day because they had a big library of videos that you could rent for a buck each. Wonder if they switched to DVDs or just got rid of the whole concept with the advent of streaming on Netflix?)

You think I would’ve cottoned on to my mother’s issue by August 2010, but it still hadn’t occurred to me that something might be wrong. Between my anxiety acting up (which we didn’t yet know I had) and no Wayne to mediate between us (he’d dumped my mom in 2008), it was the worst camping trip I’d ever been on. (Yes, even worse than that final one with my grandparents where my preteen bitchiness4 put an end to everything.)

It wasn’t a bad trip in the daytime…we went hiking at one point, went to the beach (where I played so hard with some kids that I could barely stand up for exhaustion afterwards), ate at House of Flavors at least once…but the rain just had to come back!

I don’t know if it’s walking to the bathroom in the rain.

I don’t know if it’s because rain makes the tent stuffy.

All I know is that I cried when the storm came in and did not want to be in the tent!

Watching this come in was fun…sitting in a tent while this comes in? Nightmare!

Even when it wasn’t raining, I had a hard time sleeping—probably because of cars driving around at all hours5 of the night! One of us had Advil PM in our bags (maybe it was both of us), but it turns out that diphenhydramine (the sleep ingredient in APM and other OTC pills) makes me nauseated above a certain point, which made the situation even worse. By Sunday, Mom was upset with me and I was unhappy in general, so we went home a day early. She must have calmed down after we were on the road for a while, though, because we played a few word games, and that what how I found out uglifruit existed!

Would I be happier now that I have klonopin on my side? Probably not…I can still see myself longing for my childhood trips in a travel trailer!

1If you’re not familiar with the nature of my health problems, feel free to ask.

2I haven’t been able to eat a proper breakfast since I was a junior in high school. As a senior, I imagine it was anxiety…and in the years after, more anxiety, given that I would often be up for breakfast only because I had a job interview.

3They brought a single for me, but it was so small that even with the screen uncovered, it gave me a bit of claustrophobia. (Like those two were going to Do It on the hard ground, anyway!)

4Okay, maybe one part bitchiness and one part “my parents are divorcing and even though they’re miserable together, it still hurts!” (I don’t remember if we stopped going when I was eleven or twelve, though.)

5When I was young, each campground had gates that they’d close at the end of visiting hours; but I have no way of knowing if they stopped after determining it was a safety violation, or if it was just the DNR patrolling hourly.

A Warning from the National Intelligence Agency
Kitra Vilhuelvier, Director

Escaped Inmate — To Be Considered Armed and Extremely Dangerous

The National Intelligence Agency, Los Angeles Field Office (NIA-LA) released an escaped inmate alert on Saturday, May 26, 2012 at 17:00 Pacific Daylight Time. The inmate in question, Eric Anthony Roberts, known to his friends and colleagues as “Eric”, was last seen in the custody of Supervisory Special Agent Eliza Roberts on Friday, May 25, 2012 at 23:47 Pacific Daylight Time. Roberts has been under the supervisory special agent’s personal supervision since August 16, 1992, although he has been occasionally seen in the care of NIA-LA Special Agent Emma Roberts since February 10, 2009.

Supervisory Special Agent Roberts has provided us with the following security stills of her missing inmate:

This escape is not an isolated incident–Roberts’s last reported escape was on March 3, 2009, seen here:

Roberts is not to be confused with Julia Fiona Roberts (in detention at the August-Osage County Correctional Facility, under the supervision of John Wells), or Lisa Roberts-Gillan, who is on extended probation with Detective-Sergeant Tony Gillan.

Roberts is to be considered armed and extremely dangerous and should not be approached unless absolutely necessary. If you see Eric Anthony Roberts, please contact Supervisory Special Agent Eliza Roberts or Special Agent Emma Roberts immediately; or contact your local authorities.

The National Intelligence Agency Thanks You for Your Cooperation

Words with My Words

You have some explaining to do. In fact, I’d like some answers right now.

You know I’ve developed an infatuation (however temporary…hence the term “temporary insanity”) with Eric Roberts.

Now, I don’t mind the fact that you went AWOL last year when I developed that infatuation with Jeremy Irons. I didn’t want to write poetry about him, anyway. (Or stories, either, apparently.) But you know I want to put words on paper about Eric, because you’ve been supplying me since the eighteenth so I can write League of Lost Souls.

I know we haven’t been the best of friends in regards to Jamie. I mean, you’ve supplied me with tons for my novels and fan fiction (I’m starting to think all the novels for the rest of my life will have young women marrying men old enough to be their father), but when it comes to poetry, you’ve slacked off. I swear that I’ve written about three times as many poems about Val than I ever have about Jamie. I give you the fact that I was crazy for Val for an entire decade before I gave up on him, but come on! What is wrong with you? I actually love Jamie, for fuck’s sake! Can’t I have a little more poetry about him? Just for my collection, if not actually for him?

And what’s with this?

Get with the times!

Maybe I don’t want your help.

Goddess forbid there’s anything left to read when this little crush is said and done.

I get the idea of “Zombie Jesus”–or at least I think I do. And I can see how it’s amusing…and fits right in with the zombie zeitgeist. But Jesus was definitely not a zombie.

(Since I’m not Christian, let’s call this the “Temperance Brennan defense” instead of the “religious defense”.)

I’m not into zombies, but as far as I know, they:

Based on what I know of the bible, Jesus didn’t fall apart after a half a dozen steps. Or at all, despite the several days he spent with his followers after rising from the tomb. His intelligence and personality seemed to remain intact and I doubt he stunk any more than anyone else did at that time, owing to the amount of baths they may or may not have taken. (I get the idea that even at that time, Jews were into bathing, especially for purification reasons, so they probably didn’t stink very often.)

And most importantly? Even if zombies were real, I doubt they’d get into the Christian heaven (or any of the paradises of any of the other religions), owing to their unfortunate penchants for cannibalism. And Jesus got zapped back into heaven after he was done with his post-resurrection ministry.

So there we go.

* The exception to this is Camille, from the Sienna Miller movie of the same name. She started falling apart at one point and she may have stunk somewhat, but she retained her intelligence, personality and overall appeal throughout the entire story.